A downloadable game for Windows, macOS, and Linux

Small Favors is a comedic fantasy RPG with over 40 hours of content, and it's 100% free! In their quest to exterminate a group of demons, your party will be challenged by devious dungeons, perplexing puzzles, murderous monsters and most difficult of all: tolerating each other. You'll meet a colorful cast of bizarre bystanders along the way. Some will help you, some will kill you, some will burden you with all of their problems, and some are dogs. Many of these categories overlap. Dogs included.

NOTE: Small Favors is still in active development. The current projected release window is Q2 2022. More details can be found in the development log.

And man... that demon fortress book puzzle is almost impossible, i have no idea how solve the one related with the clock or the mirror!

Amazing game! Im in front of the antechamber and sad with the end of the content :( But im rooting for the rest of the game. In the begin I was skeptical with the characters but they grow a lot in the game without lose their fun gimmick.

Thank you so much for all the feedback! Some of the things you mentioned, such as the steal command missing a file and the game getting stuck when entering the witch's tower, have already been fixed in 0.9.2. I've identified and fixed the deepest dungeon bridge problem. Within a week or so, once I get the time to investigate the Poofems volcano issue, I'll upload a new version 0.9.3 with those fixes as well. Though I can't guarantee other changes I'll keep your balance feedback in mind for the final release. Thanks again, I'm glad you enjoyed it!

I've pushed an updated version 0.9.3 with the deepest dungeon bridges fixed. However, I was unable to reproduce your bug with the Poofems encounter at the volcano fort entrance. Every variant of the event I've tested increments the quest variable and has Poofems appear at her next location in the Mystic Island jungle. In a similar vein none of her dialogue suggests she's in a house to the northwest. It says a jungle on an island to the north, perhaps that's where the confusion is coming from? I've tweaked the dialogue to make that slightly clearer, but otherwise the event remains unchanged. If you still believe the event is broken and have any further details please let me know. Thanks again for the feedback!

Well thats strange, i reloaded my save and in fact now poofers appeared in the jungle as should be. And in fact she tells to finde her in the north in the jungle. But i could swear that when i had that strange bug she tould to finde in the north west house. Good to know that my feedbacks helped somehow. I remember now that i also had a lot of trouble with the temple puzzle with that winter's wizard friend. Maybe because english isnt my mother language and i had some trouble understanding some text detals. Anyway, good luck and keep that good work!

Ahh. I finished the end of the game (current) I got the Philosopher Stone and the Cheater Ring. It said to promise not to use it in the next game. Can I keep them to the next, or will it disappear?

Thank you for playing! It's been helpful to get some feedback. As for those cheating items, there's no consequence to using them. It's more of a recommendation, because when the final version of the game releases they'll take the challenge out of the last couple hours. I don't think I'll remove them in the final version though, consider it a reward for finishing early.

Speaking of which, the ending is planned for release by the end of 2021. I'm the only developer and have a full-time job, so it'll be at least half a year. But as soon as the final version is complete I'll upload it here, so keep an eye on this page this page next winter.

Great! I found your Blogspot ^^ How do I find the map for that guy that only comes out on night?

He should've given you a key item called Rail Clue Sheet. Using it will give hints on where to dig in the desert to find the three pieces of the map. All three are in ruins in the desert, so look for screens with broken walls and tiles, then use a shovel in places that fit the clue sheet's descriptions. Once you have all three map pieces you can return to Rail outside the inn at night.

Ahhh, finally had a question. Where do I find the Quake Tortoise? I finished most of the game already!

The Quake Tortoise is found in the mines south of the desert. There should be a path in the desert you can follow to the entrance. In the first room of the mines head to the right to reach the Tortoise's lair.

Cannot solve the lever problem in the Ruins. The green-haired guy who takes you to the ruins and have to solve riddle to disable trap.

The levers in first room of the ruins should be flipped if the carving matches all three of the phrases Viklund (green-haired man) says. I've made this dialogue a little clearer for future versions. If you just want the solution, it's flipping the middle-left, lower-left and middle-right levers. Make sure those are the only levers flipped on. Then the trap on the door will be disabled.

Also, how to get a boat to defeat the firebird?

The boat is given to you as part of the main storyline. If you're not sure how to progress that story, the most helpful place to check is usually the Oasis inn.

Where can I get Regen Vial for the sick girl? Thanks!

Regen Vials are dropped or stolen from Goop/Ooze enemies in the abandoned library and volcano fortress respectively. They can be purchased at the item shop after you do a quest to upgrade their inventory, though this requires a boat. They can also be crafted at the alchemy shop in the witch tower if you find the Healer Recipes, which are in a chest on the western bluff. It's also valid to put the quest on hold until later, as there are some chests in higher level areas with them.

The jelly fish i way more weak than those places, i tink that the vial is more dificult that the quest's boss, that is kind of anticlimatic. I guess that we could have one of theses early in the game. I just abandoned the quest and when i finished all others boat side quests i remembered that girl and back to heal her.

How do I do Ryan's puzzle? I already did all the string attached.

Something shiny in the fireplace... Probably the key to open the drawer. But there is a fire, how to get the shiny thing? The doll is suspicious, especially when the guide to dolls have a few burnt pages.

The drawer is what opens after you solve the string puzzle, whose order is indicated by the objects on the wall. When you pull the last string it should say you hear the drawer opening, but I also included a sparkle animation in the new version to make it more obvious.

indicated by the objects on the wall???

I don't get string puzzle...

Stealing of all forms seems to have some weird error come out (v9, not sure about new)

Can choose what to steal, but after your action initiates, it would say it failed to load audio/se/Buzzer2.ogg (or at least first example.

Thank you for catching this. I believe I know why this is occurring and will look into fixing it and releasing another patch. I don't have time to do so now, but look out for v9.0.2 within a day or two.

Patch 0.9.2 is live. All issues related to stealing should be resolved, but if not let me know.

And I don't know what to do when I was trapped in the mansion north of the forest. The fake books. . . .

There are three fake books you can take off the shelves in the house in the woods. You need to place those books back on the shelves in a different order. Place the light yellow book closest to the mirror, the red book on the middle shelf, and the dark blue book farthest away from the mirror. After that the books will lock into place, and examining the mirror will give you the next piece of the puzzle.

I cannot go to the witch tower north of Oasis (after the talk with the witch, the game freezes, and I need to restart it.) And where is Lonely Cactus to find the bandits? Thanks!

Would you be able to tell me what specific dialogue was said right before the game froze? I'm trying to find why it would freeze at the witch tower but any further details would help. Thanks!

As for the lonely cactus for the bandit clan quest, search the central desert for a screen with only one cactus. If you head to the top-right/northeast of the desert, where there's a cave entrance, the lonely cactus is one screen to the left.

"Floor one is where I sell Arcane tomes. Magic studying is SO much more awesome than the normal kind! You can learn new skills using them." says the witch.

Oh yeah. when I defeated the snake to get the treasure, I still cannot pass.

I'm assuming you're talking about the boss at the end of the snake clan cave? If so the treasure in the last room is decorative, you can't take it because it's stolen from other people. The characters should've suggested you go back to Oasis to report it, after which you'll get a reward. I'll consider making this clearer in future versions.

I found the bug and reproduced it, then tested a fix which resolved the issue. All platforms of the game have been upgraded to version 0.9.1 with this new fix in place. You should be able to download the appropriate files then simply move your saves into the new folder and continue playing. If that doesn't resolve the issue let me know. And thank you for finding this bug!

Reply
d757gaming304 days ago
We are live!
Reply 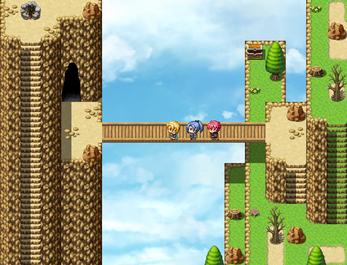 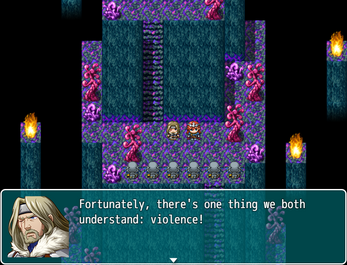 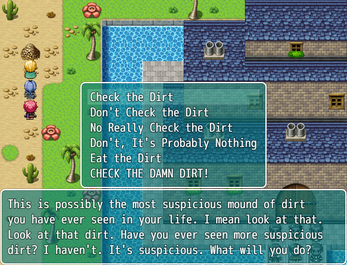 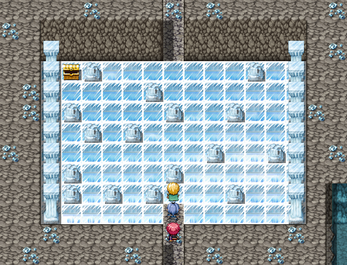 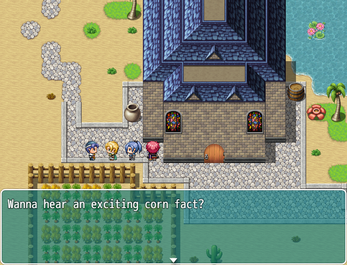